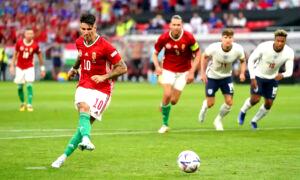 Hungary stunned England 1-0 in their opening group game of the UEFA Nations League on Saturday, making it the first time the Three Lions have lost a game since their Euro 2020 final loss to Italy.

Dominik Szoboszlai scored from the penalty spot to give Hungary their first victory over England since 1962.

Gareth Southgate said fatigue was responsible for his players performance as they outplayed the Hungarians but failed to convert their statistical dominace to goals.

“They are bitterly disappointed because we want to keep winning matches. If we want to be a team right at the top tier of football, we need to come here and win,” said Southgate.

“It has been a long season. The heat was a factor and took a lot out of the players.”