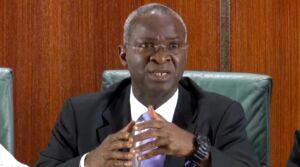 Minister of Works and Housing, Mr. Babatunde Fashola, will today flag off construction of the Nembe-Brass road project in Bayelsa State.

The long-awaited project, which has been on the drawing board of the Federal Government for decades, is being undertaken by the Governor Douye Diri administration in the state and has been awarded to Setraco Nigeria Limited.

The first phase covering a distance of 21 kilometres with 10 bridges is estimated at N54.1 billion.

Diri said, yesterday, during the 79th state executive council meeting in Government House, Yenagoa, that the project had a historic  significance and economic importance to the state and the country.

Located on the Brass Island are an oil export terminal operated by oil major, Nigerian Agip Oil Company as well as the ongoing Brass Fertilizer and Petrochemical Company project.