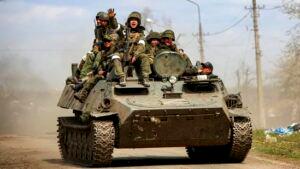 Russia has lost its 58th officer to the ongoing war with neighbouring Ukraine as tank commander Lt. Col. Yegor Meleshenko was killed.

According to a report by Daily Mail, Tuesday, Meleshenko, a tank battalion commander was 43-year-old.

The report said: “Putin has lost yet another high-ranking military officer amid bitter fighting in Ukraine as his forces suffer a series of humiliating setbacks.”

“Lieutenant Colonel Yegor Meleshenko, 43, was killed in the Donbas region while fighting.”

Meleshenko, a tank battalion commander, is the 58th colonel to have been killed since Putin ordered his troops over the border on February 24.

No further details have been given about how Meleshenko died, but his death highlights the terrible losses of high-ranking officers suffered by Russia.

The war, which has now raged for…