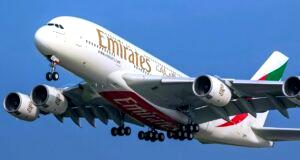 Emirates Airlines has announced plans to reduce its weekly flights to Lagos, Nigeria from eleven to seven owing to its inability to repatriate the sum of $85m earned from ticket sales in the West African country.

The airline in a letter addressed to Minister of Aviation, Sen. Hadi Sirika, signed by its DSVP, International Affairs, Sheikh Majid Al Mualla said the move is to cut down the loss the mega carrier has been experiencing in the country as a result of its blocked funds in Nigeria.

The letter dated July 22, 2022 read: “It is with a heavy heart that I write to inform you of planned reductions in Emirates’ operations to Nigeria.

“With effect from 15 August 2022, Emirates will be forced to reduce flights from Dubai to Lagos from 11 per week to 7 per week. We have had no choice but to take this action, to mitigate the continued losses Emirates is experiencing as a result of funds being blocked in Nigeria.