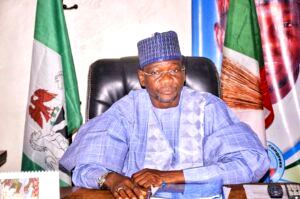 ..Says is not in receipt of any letter of resignation before suspension

The Borno Chapter of the ruling All Progressives Congress, APC has confirmed the suspension of Hon. Barrister Mohammed Umara Kumalia from being a card carrying member of the party following his alleged involvement into anti-party activities.

Recall that, last Monday 8th August, 2022, a letter of Kumalia’s suspension which was signed by the APC Secretary of Limanti Ward, Maiduguri Metropolitan Council, MMC, Mohammed Kagu went viral in Conventional and Social Media platforms, but in what could be described as a defence, Hon Kumalia last Tuesday issued a press statement distancing himself from the letter, claiming that he has since tendered his resignation letter to the authorities of the APC since 21st March, 2022.

But reacting to Kumalia’s letter of resignation, the Borno APC in a letter addressed to Hon Kumalia and signed by its Publicity Secretary, Hon Makinta…