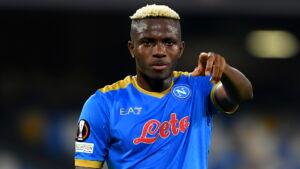 AC Milan begin their title defence on Saturday evening when they host Udinese in a Serie A opener at San Siro.

The club which ended last season with 86 points to claim the title have fortified the team with the like of Charles De Ketelaere, Junior Messias, Alessandro Florenzi and former Liverpool striker, Divock Origi.

Inter Milan which finished behind their neighbours last season will travel to the newly promoted club Leece later today by 7:45 pm with the hope to bag three points as misfired ex-Chelsea Romelu Lukaku seeks to be in a form in Italy.

On Monday, Super Eagles striker, Victor Osimhen is expected to be in action as Napoli travel to Verona where they will slug it out at Marcantonio Bentegodi Stadium.

Juventus will welcome Sassuolo at Allianz Stadium on Monday evening as Paul Pogba who has returned to the club from Manchester United is expected to be in action with former Paris St Germain forward, Angel Di Maria.