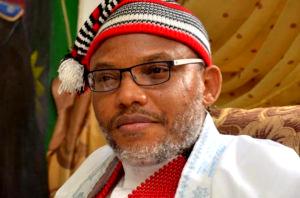 The leader of the Indigenous People of Biafra (IPOB), Nnamdi Kanu’s lawyer, Chukwuma-Machukwu Ume has petitioned the Attorney-General of the Federation and Minister of Justice, Abubakar Malami to act on the directive of the United Nations Working Group to free the IPOB Leader from detention.

In a letter made available by Kanu’s special counsel, Aloy Ejimakor on Saturday, the Foreign Affairs Minister, Geoffrey Onyeama was also copied.

The petition reminded the two ministers that their offices are responsible to enforce Kanu’s unconditional release as demanded by UN, stating that his arrest in Kenya last year contravened the international law.

It partly read: “We are Solicitors to Mazi Nnamdi Kanu (hereafter: our Client), on whose behalf and instruction we write this obvious Letter.

“We believe your good Office is already in receipt of the 17-page Opinion (no.25/2022) adopted by the United Nations Working Group on Arbitrary Detention (at its…