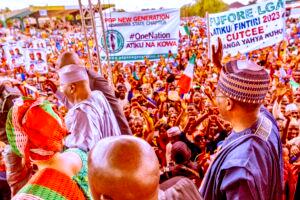 The former vice president, on Monday, attended a rally in Yola, the capital of Adamawa state, his home state, where he formally received supporters of the ruling All Progressives Congress, APC in the state, including two state lawmakers, who defected to the PDP.

Considering the political stature of Atiku, one would have expected the event to see the weight of PDP structure reflected in the Adamawa rally, but this did not happen.

One of the major pointer that Atiku’s camp is experiencing some silent crisis is that no PDP governor, (apart from the host, Governor Fintiri of Adamawa) and only four members of the NWC, attended the event.