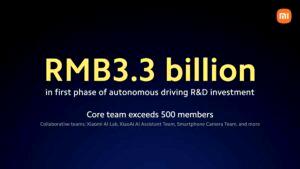 Xiaomi Group officially revealed the development status of Xiaomi Pilot Technology today, in the first R&D and staffing update since announcing its entry into the smart electric vehicle segment in March 2021, 500 days ago. Xiaomi plans to invest RMB 3.3 billion in the first R&D phase of its autonomous driving technology, and has established a sizable R&D team of more than 500 world-class professionals. A series of valuable acquisitions and strategic investments in upstream and downstream enterprises have also allowed Xiaomi to steadily build out its mid-to-long-term industrial capabilities in the field of autonomous driving.

During today’s press conference, Xiaomi also released a live road test video of its autonomous driving technology, demonstrating its advanced algorithms and capability to handle a comprehensive list of scenarios.

“Xiaomi’s autonomous driving technology adopts a self-developed full stack approach, and the project has made progress beyond…