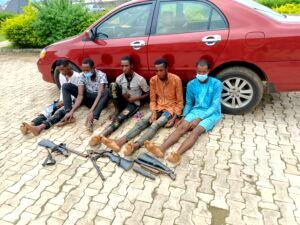 The kidnappers of the Onikun of lkun, Mukaila Bello, in Ondo State have expressed surprise that N4 million ransom was paid.

The five visibly angry kidnappers said their leader told them it was N2 million, and gave each of them N200,000. Meaning the leader, who is on the run, took N3 million.

Recall that the traditional ruler, the Onikun of lkun, Mukaila Bello and others were kidnapped at about 6:30p.m., around Ago-Yeye, along Owo/Ikare Road on August 4, this year after the driver conveying them was shot in the head.

The other victims were were a former House of Assembly candidate for Akoko North-East Constituency Yèyé Gbafinro; a chieftain of the All Progressives Congress,…