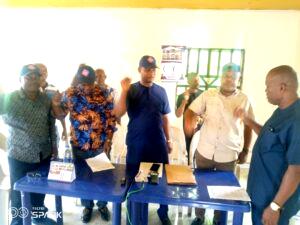 The National Union of Electricity Employees, NUEE, on Tuesday said they were ready to embark on another nationwide strike.

The Vice President of the Union, (East) Comrade Engr. Joe Oforka, alongside other executives the zonal Secretary of the Union in the South East/South South States, Comrade Ugboaja Joseph, disclosed this to newsmen in Owerri.

They alleged that the federal government after almost nine years has refused to pay entitlements of the some of the workers of the defunct Power Holding Company of Nigeria, PHCN.

Also, they were angry that the two weeks given to the federal government to implement the 2019 agreement had elapsed.

According to them, “It is an undeniable truth that the Power Sector privatization has not added value to the lives of ordinary Nigerians. The entire exercise which could be described as a charade has not brought any meaningful impact/improvement for the people.

“The union further says that almost…