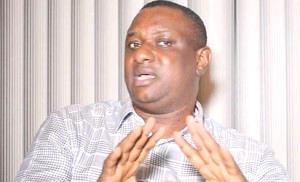 Spokesperson of the ruling All Progressives Congress, APC Presidential Campaign Council for the 2023 elections, Festus Keyamo has dismissed claims that he sued the presidential candidate of the APC, Asiwaju Bola Tinubu over allegations of certificate forgery.

The Minister of State for Labour and Employment stated that he sued the Lagos State House of  Assembly and not Tinubu.

He said, “I never sued Tinubu. No. I sued the House of Assembly seeking an interpretation of the law.”

Recall Keyamo had come under fire for taking spokesperson of the APC flag bearer, after allegedly suing Tinubu over alleged certificate forgery when he was the governor of Lagos state.

Keyamo’s reaction comes on the heels of a statement by the Spokesperson for the Atiku Abubakar Campaign Organisation, Daniel Bwala, who insisted that Keyamo sued Tinubu during his first-term as Lagos…