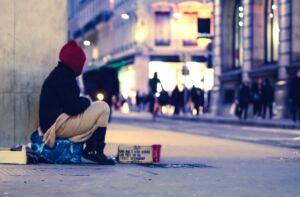 A homeless man in Sherman Oaks, Los Angeles, the United States has been accused of throwing faeces at a local business owner, Paul Scrivano.

Scrivano who was upset after the disgusting incident lodged complaints with officials stating they were not doing enough about the homeless in Sherman Oaks.

Read also: Police arrest Nigerian woman notorious for breaking into mansions in US

According to Yahoo News, Scrivano is the owner of the Blue Dog Beer Tavern in Sherman Oaks who has claimed the same homeless man throws faeces on the hood of his car every day and has the footage to prove it.

“Every day, it’s like ‘One Flew Over the Cuckoo’s Nest.’ Literally a psych ward. Every single morning, I’m wiping that off my property before I have to do business,” lamented Scrivano.