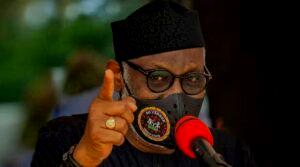 Governor Rotimi Akeredolu, of Ondo State declared yesterday that his administration will acquire arms to protect citizens of the state against life-threatening marauders and organized crime.

The governor made the declaration as no fewer than 14 people were Wednesday night murdered in two separate attacks by suspected armed herdsmen on Mchia and Mou communities in Logo Local Government Area of Benue State.

This is even as anxiety has heightened at the Ekwegbe axis of Nsukka-Enugu Bypass Road in Igbo-Etiti Local Government Area of Enugu State, as suspected armed herdsmen on Wednesday evening, blocked the road, shooting sporadically with AK-47 rifles, in search of prey