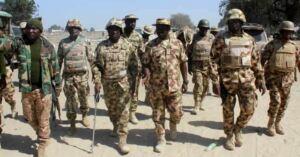 Troops of Operation Delta Safe in conjunction with troops of Operation Octopus Grip in Niger Delta, have foiled the attempts by oil thieves to siphon/smuggle 7,805 barrels of crude oil and 2,613 barrels of Automotive Gas Oil, AGO, valued at over N537. 09million while 17 pipeline vandals were arrested.

He disclosed that the operations against oil and economic saboteurs were conducted through patrol, raids, clearance and swamp buggy operations in the creeks, villages, communities and…