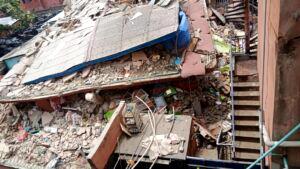 The incident, according to an eyewitness happened around mid-day amid rainstorm.

However, men of the Lagos State Emergency Management Agency, LASEMA, and Lagos State Rescue and Fire Service, Nigeria Police, among others, raced to the scene on rescue victims mission.

According to Permanent Secretary, LASEMA, Dr. Femi Oke-Osanyitolu,
further investigation revealed that the collapsed building was an adjoining building to another three storey building.

“About eight people were said to be trapped inside the building, four,…