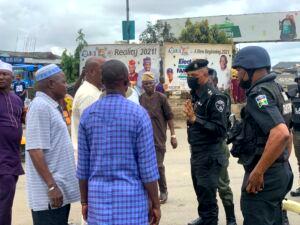 No fewer than 10 passengers of commercial motorcycles popularly known as Okada have been charged to court for flouting the law which prohibits Okada in some parts of Lagos.

This was enforced by the Lagos State Taskforce which also impounded 150 motorbikes in the cause of week-long enforcement in the state.

Disclosing this in Lagos, on Sunday, at the Agency’s headquarters office, in Bolade, Oshodi, Chairman of the Agency, CSP Shola Jejeloye, said the operations were carried out at Ogba, Apapa, Tradefair, Elemoro, Ojodu and its environs.

He disclosed that traces of commercial motorcycles operations popularly known as Okada had been noticed in the aforementioned areas and other parts of the State despite the ban on their activities still being in place, prompting the need for the Agency to carry out the necessary mop-up exercises in the city.