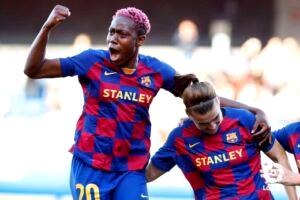 Oshoala scored Barcelona’s second goal of the game in the 48th minute, chipping the ball past the Yellow Submarine’s goalkeeper who had left her line.

The 27-year-old was replaced by Claudia Pina in the 66th minute.

Oshoala has made two league appearances for the champions this season.

She was the joint top scorer in the Spanish Iberdrola last season, with 20 goals in 19 league appearances.

The Barcelona femini will be up against rivals, Real Madrid in their next game, and Oshoala will be looking at replicating same performance in the women version of the El-Classico.