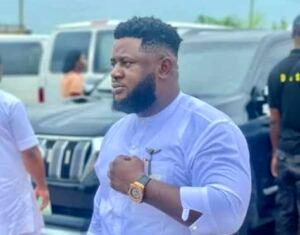 Abuja— A video of John Lyon, an alleged kidnapper known for flaunting dollars on social media, has gone viral with Lyon weeping like a child in police custody.

In the video, the suspect popularly known as “Lion White” was shirtless, putting on only boxers and kneeling down.

Lyon pleaded for mercy, saying he was only involved in kidnap operations twice. He also asked to be released because his wife had just been put to bed.

A voice in the background suspected to be that of a police detective asked the suspect in pidgin: “So, are you saying it is only two persons you have joined your gang to kidnap?

Lyon replied: “Yes, sir,” and the voice declared: “You are a liar.”

A man, who claimed to be one of his victims, challenged Lyon that he saw him while he was in captivity and was being tortured.

Pictures and videos of Lyon’s flamboyance life are circulating on social media.

In one video, the suspect displayed wad of…