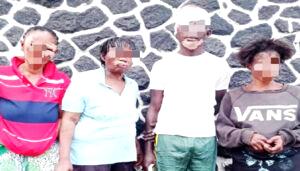 The Lagos State Police Command has arrested four suspects following an alleged attempt to kidnap a 10-year-old girl in the state.

Confirming the development, the state Police Public Relations Officer, SP Benjamin Hundeyin, in a tweet, said the suspects were rescued from being lynched by a mob, who caught them perpetrating the crime.

He said, “These four elderly people allegedly attempted to kidnap a 10-year-old girl. People around apprehended them and beat them black and blue. The police arrived on time. Investigation is ongoing. Stop jungle justice! Report crime and criminals to the police.”

The PPRO said two persons were rescued from being lynched by an angry mob who descended on them for allegedly possessing the corpse of a child in the Oshodi area of Lagos State.

According to a report, the child fell ill at midnight and died before his family members could rush him to a hospital for…