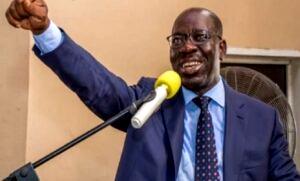 The apex court, in a unanimous decision by a five-man panel led by Justice Amina Augie,  dismissed two appeals that were filed by a faction of the party in the state, loyal to Chief  Dan Orbih.

The panel held that the appeal marked: SC/CV/980/2022 and  SC/CV/979/2022, which was filed by  Adhoc Committee members of Chief Orbih’s faction led by  Hon. Monday Iyore Osagie, was non-justiceable, being a domestic affair of a political party.

It held that no court has the jurisdiction to meddle in an internal affair of a political party.

In its lead judgement that was delivered by Justice  Emmanuel Agim, the apex court, upheld the Court of Appeal verdict that earlier dismissed the appeals for want of jurisdiction.