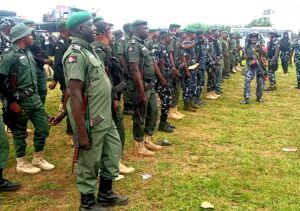 Officials of the Nigeria Police on Tuesday, dispersed supporters of the All Progressive Congress Supporters (APC), under the auspices of Danmodi Youth Concern, in Dutse, the Jigawa State capital.

The supporters converged at the Investment Centre in Dutse for a rally to rally support for the APC governorship candidate and the state deputy governor, Umar Namadi.

Police Public Relations Officer in the state, Lawal Shiisu, who confirmed the incident to newsmen, said the supporters had a disagreement and began to fight one another, before the police intervened.

According to him, the Danmodi Youth Concern intended to show support to the governorship candidate, Umar Namadi popularly known as Danmodi, by marching to the orphanage in Dutse and donating relief materials to the orphans.

He said, “However, a fight erupted between them and the police had to mobilize to put a stop to the unruly behavior.”

According to one of the members of the Danmodi Youth Concern, the…