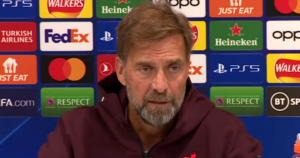 Liverpool boss, Brendan Rogers has admitted that the undoing of his side this season has been their defense, noting how much they need to get “back to the basics”.

The Reds’ defense has come under intense scrutiny this season as the team have kept just two clean sheets in all competitions, with Klopp citing the lack of intensity in their players as a factor.

“We have conceded similar goals with teams going through the same gaps. The problem we have is a brave way of defending. We need intensity and if we don’t do that then it’s a problem. We have to be more compact. Defending is an art, and it worked for us really well for a long time. But with it not working you realise you have to go back to the basics,” Klopp said at a pre-match press conference ahead of Tuesday’s Champions League game against Rangers.