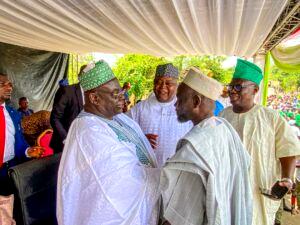 A former governor of Niger State, Muazu Babangida Aliyu on Monday in Abeokuta, the Ogun State capital described the People’s Democratic Party (PDP), Alhaji Atiku Abubarka as the most qualified person to take over power from President Mohammadu Buhari in 2023.

Aliyu, who was in Abeokuta in the company of former governors Ibrahim Shekarau (Kano) and Boni Haruna (Adamawa) rallied support for the presidential ambition of Atiku.

Addressing over 20 volunteer groups that gathered at the PDP Secretarial in Abeokuta to declare their support for the presidential ambition of Atiku, the former governor of Niger State, insisted that Atiku remains the healthiest candidate among those vying for the presidency.