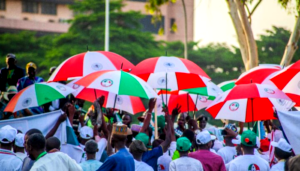 Peoples Democratic Party (PDP) Presidential Campaign Spokesman, Mr Charles Aniagwu says the crisis rocking the party would soon be over just as the party prepares to flag-off its campaign at Uyo, October 10.

Speaking on Kakaaki,  AIT, on Tuesday, Aniagwu said the party’s reconciliation efforts were yielding results bringing hope of resolving the crisis in no distant time.

He said that having inaugurated its Campaign Council, the party would flag-off its campaign on Monday in Uyo, the Akwa-Ibom state capital.

According to Aniagwu, the party’s Presidential candidate Atiku Abubakar, his running mate, Senator Ifeanyi Okowa and other leaders of the party were working hard to resolve all contending issues to enable it present a common front ahead of the 2023 general elections.

“Atiku has said he is not going to leave anybody behind so what we are doing is to ensure that everybody comes on board.