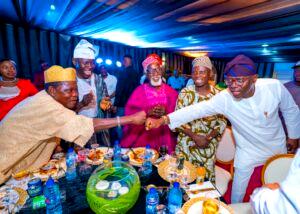 Ahead of the 2023 general polls, theatre practitioners and Nollywood Stars have unanimously endorsed All Progressives Congress, APC’s Presidential Candidate, Bola Tinubu for presidency and Lagos State Governor Babajide Sanwo-Olu for second term with a promise to work for their victory in the 2023 presidential and governorship elections.

Governor, Sanwo-Olu, had earlier announced plans to institute a health insurance scheme for theatre practitioners in the state.

The Governor announced the scheme during a dinner with veterans in the Yoruba Nollywood industry at the Lagos House, Marina on Monday night.