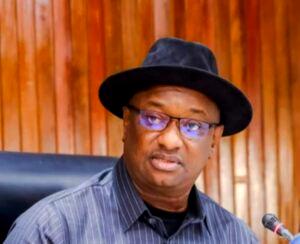 The Spokesperson of the Tinubu/Shettima Presidential Campaign Council, Festus Keyamo has mocked the Peoples Democratic Party, PDP  over the absence of the Governor Nyesom Wike of Rivers state at the PDP campaign flag-off in Uyo on Monday, describing the campaign as a disaster waiting to happen.

Keyamo, in a statement, on Monday described the absence of the Wike and other PDP governors as a warning signal.

According to Keyamo, the launch of the presidential campaign was a disaster waiting to happen, saying the opposition party had continued to treat the Nigerian public with disdain and disrespect.

Recall that Wike and his counterpart governors of  Oyo State (Seyi Makinde), Benue State (Samuel Ortom), Abia State (Ikpeazu Okezie), and Enugu State (Ifeanyi Ugwuanyi) and some members of the National Working Committee of the PDP were absent at the official launch of PDP’s presidential campaign in Uyo, Akwa Ibom State.