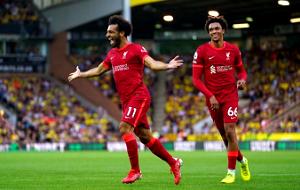 Liverpool got back to winning ways in the Premier League after a superb second-half strike from Mohammed Salah earned them a 1-0 victory over Manchester City at Anfield.

The first half ended goalless and listless as both teams headed to the dugout only to come out with fierceness in the second half as Ederson made a stunning save to stop Salah from opening the scoring few minutes after the break.

Phil Foden then thought he had opened the scoring in the 53rd minute, sparking wild celebrations on the City bench, only for the goal to be ruled out following a VAR review with Erling Haaland deemed to have fouled Fabinho in the build-up.

Liverpool recovered from that and kept piling the pressure on City, and that eventually paid off as Salah went clear on goal after a mistake from Joao Cancelo to fire past Ederson.

Liverpool held on for just their third league win of the season to move up to eighth in the standings on 13 points, 10 behind second-placed…