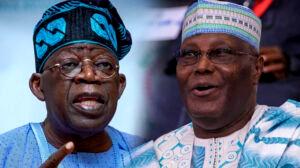 The presidential candidate of the All Progressives Congress (APC), Bola Tinubu and his counterpart from the Peoples Democratic Party (PDP), Atiku Abubakar met in Kaduna on Monday in their bid to get votes across the country ahead of the 2023 general elections.

In a viral video, Tinubu, his running mate, Senator Kashim Shettima and other APC chieftains came into the lounge where Atiku was already seated with his cronies.

After both politicians shook hands cheerfully, they threw banters at each other with Atiku started calling “Jagaban” and the former Lagos governor also responded saying “Atiku.”

Later, Tinubu chatted with the PDP national chairman, Dr Iyorchia Ayu before moving closer to the former Vice President and touching the PDP emblem embroidered on his white attire.

Recall that both standard bearers had earlier criticised each other over Atiku’s call on the Northerners to vote for him, saying they do not need a Yoruba or Igbo…