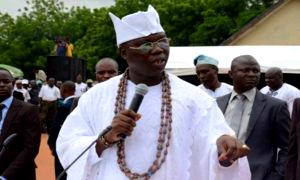 Speaking at the grand finale of the 2022 edition of Olokun Festival at Suntan Beach, Adams said the Lagos Badagry road should have been completed earlier for it to serve its trans-regional role in West Africa.

The Yoruba generalissimo said: “The Badagry Port and Free Zone is a new deep-sea facility in Nigeria, that is expected to be the largest deep-sea port in Africa.

“It will include a container terminal, oil and gas services and a liquid bulk terminal, with cargo and Ro-Ro facilities.

“The multibillion-dollar deep seaport is a project with a lot of prospects for Badagry. The Deep Seaport will be a big relief in many ways.

“For instance, it would create employment for about 250,000 Nigerians and attract more Foreign Direct Investment, FDI.

“The Seaport would also…