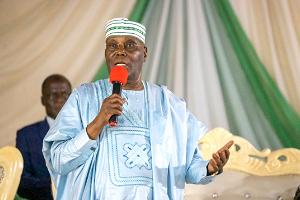 Presidential candidate of the Peoples Democratic Party, PDP, Abubakar Atiku has departed Nigeria the United States of America to intensify his political campaigns ahead of the 2023 elections.

Atiku is proceeding on a weeklong political campaign in the US, where he would be meeting Nigerians and business community during the visit.

While in the US, Atiku would be meeting with Nigerians in Diaspora as well as with the PDP members in North America.

According to report, the PDP presidential candidate would also meet with top Nigerian business leaders based in the US, as well as young Nigerian professionals in the diaspora.

Atiku will also hold meeting with some other business communities in the US during the vist.

Recall that Atiku flagged off his campaign in Uyo, Akwa Ibom State three weeks ago. He has also followed his campaign flag-off with the Kaduna campaign last Saturday, with another campaign in Benin, the Edo State capital…