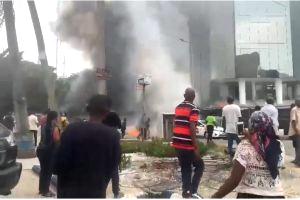 One body was recovered on Tuesday from the fire incident that gutted a four-storey building at Adeola Odeku in Victoria Island, Lagos.

The casualty was that of a male, according to Adeseye Margaret, the Director,
Lagos State Fire and Rescue Service.

She confirmed this in her updates on the fire incident on Tuesday afternoon.

According to her, the incident was reported at about 10:03am through distress call and this was responded to by the Oba Oniru Fire Station.

On the cause of the fire outbreak, she said this occurred from an industrial generating set which was being fixed before it reportedly exploded and ravaged the building.

“The generator which was housed within the premises of a commercial bank, also affected an adjoining Toyota Saloon Car belonging to the Rapid Response Squad of the Lagos Command of the Nigerian…