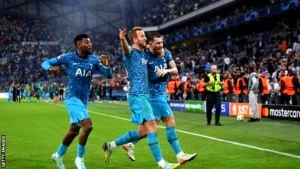 Tottenham ended Champions League Group D as winners after a stoppage-time winner helped them beat Marseille in what was a dramatic game in France.

Pierre-Emile Hojbjerg was the hero on the night as he scored in the 95th minute to seal Tottenham’s progress to the last 16.

Spurs only needed a draw to qualify from the group and all that seemed unlikely when Marseille took the lead through defender Chancel Mbemba before halftime.

At the duration at which the lead for Marseille lasted it meant Spurs were heading into the Europa League.

However, France defender Clement Lenglet drew level early in the second half before Hobjberg scored a 95th minute winner to silence the crowd in the stadium.

In the other game, Sporting Lisbon lost 2-1 to Eintracht Frankfurt to enable Spurs claim top spot in the group.

US journalist dies after collapsing at Qatar World Cup