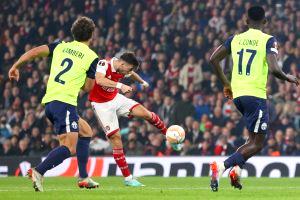 Arsenal sealed their place in the last 16 of the Europa League with a slim 1-0 victory over Zurich at Emirates Stadium.

It was a dominant first half from the Gunners with Eddie Nketiah twice stunging the palms of Zurich goalkeeper Yanick Brecher, and Fabio Vieira saw his goalbound effort blocked from close range.

There was, however, a nervy closure to the game as Zurich threatened to pull a goal back but Arsenal held on to claim an all-important victory.

The win means that Arsenal have now won all of their eight matches against Swiss clubs.

The Gunners also play Chelsea on Sunday and the win gives them a major boost going into that big premier league tie.