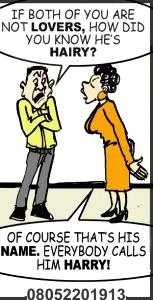 I’m 45 and a divorced mother of two teenage children. Three years ago, I met this man at a wedding and he told me straightaway he was a married man.

Despite this, we carried on seeing each other, as I felt safe with him, knowing the relationship wouldn’t go anywhere.

He confided in me about his problems at home, saying the spark had gone out of his marriage and that he and his wife only had sex once in a blue moon.

Read Also: Dear Bunmi, my aunty’s husband is too demanding

Later, however, I discovered that they’ve had another baby.

We still carried on seeing each other because the sex was great. He then started going out with another single mother, and that was when I put a stop to his fleet-footing.

But he won’t leave me alone. He phones me all the time and tells me if he were to leave his wife for anyone, I would be the one.

Quite frankly, he’s getting on my nerves. What should I do?