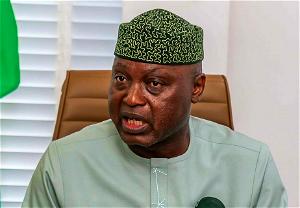 Ado-Ekiti—Ekiti State Governor, Mr Biodun Oyebanji on Thursday presented 2023 Appropriation Bill with a total of N113.6 billion, to the state House of Assembly.

Oyebanji made the presentation at Thursday’s plenary presided over by the Deputy Speaker, Mr Hakeem Jamiu, in Ado-Ekiti.

The Governor was admitted into the hallow chamber of the Ekiti State House of Assembly, following a motion by the Majority Leader, Chief Gboyega Aribisogan, APC, Ikole Constituency 1 and seconded by Mrs Olubunmi Adelugba, APC, Emure Constituency in pursuant to Section 121(1) of the 1999(as amended) of Nigeria.

While addressing the House, Oyebanji vowed to make live meaningful to the people of the state by…