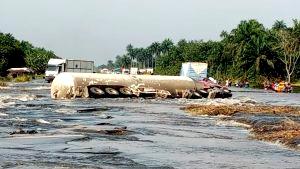 PORT HARCOURT – NIGER Delta Development Commission, NDDC, has commenced repairs to restore vehicular movement on sections cut off by the flood on the stretch from Rivers, through Bayelsa to Delta states on the East-West Road.

Following site briefing by Mitchell Issa, Project Manager for SETRACO, contractor handling Rivers-Bayelsa-Delta Sections on the East West, Audu-Ohwavborua, said NDDC’s quick intervention was in response to the directive by the Ministry of Niger Delta Affairs.

He said, “We were here a week ago with the Minister of Niger Delta Affairs on…