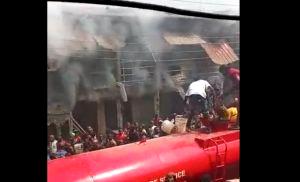 According to reports, human casualties were recorded even as the inferno equally destroyed goods and properties worth millions of naira.

Firefighters are presently at the scene trying to salvage the situation.

Meanwhile, the Transition Committee Chairman of Onitsha South LGA and Anambra State firefighters have already arrived in the area with a view to controlling the raging fire.