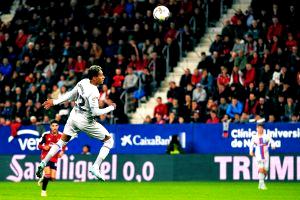 Barcelona moved five points clear of Real Madrid on top of the LaLiga Santander after downing Osasuna 2-1 on Tuesday.

It was not one of the easy games for Barcelona as they got behind as early as the 6th minute and later saw their ace striker, Robert Lewandowski got sent off in the 31st minute after picking up a second yellow card.

Reduced to 10-men, Xavi side had to fight their way back to ensure they go into the World Cup break as league leaders.

Pedri started the come back three minutes after the break as he pounced on a rebound from a Jordi Alba cross to spark hopes of a comeback.

Barca’s persistent effort then got rewarded in the 85th minute when substitute Raphinha looped a fine header over on-rushing Aitor Fernandez to secure a hard-fought away win for the Blaugrana.

The win sees Barca sit on the summit of the league with 37 points, five clear of rivals Real…