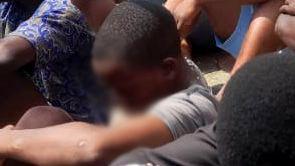 The Ondo State security outfit, codenamed, Amotekun, has arrested a 16-year-old teenager, identified as Precious, for allegedly raping his brother’s wife and nine others in Ondo city, Ondo state.

Parading, the suspect, alongside other criminals, in Akure, the state capital, the state commander of Amotekun , Chief Adetunji Adeleye, said that the suspect raped the wife of his brother when he traveled outside the town.

The suspect, was equally accused of stealing 25 litres of palm oil.

Precious, reportedly walked into the bedroom of his brother and noticing that the wife was naked and was sleeping, took advantage of her.

He reportedly threatened to kill the woman if she raised any alarm.

In an interview, the suspect who admitted committing the crime, confessed “raping nine other girls at Laosun, a farm settlement in Ondo West local government area.