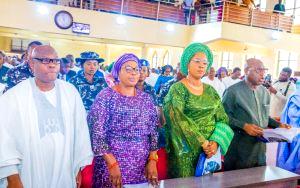 Ado-Ekiti – Ekiti State Governor, Mr Biodun Oyebanji on Friday led other dignitaries including the immediate past Governor of the state, Dr Kayode Fayemi; Minister of Industry, Trade and Investment, Otunba Niyi Adebayo and Ondo State Deputy Governor, Mr Lucky Ayegbatiwa, to grace the burial of the late Speaker of the State House of Assembly, Rt. Hon Funminiyi Afuye in Ikere-Ekiti.