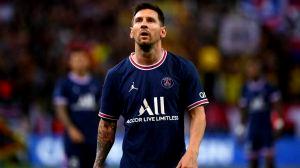 Paris Saint-Germain forward, Lionel Messi has identified Manchester City boss, Pep Guardiola as the best coach he has had in his career so far.

The Argentine had arguably his best stint under Pep Guardiola between 2008 and 2012.

He netted 211 goals and registered 94 assists in 219 matches under the Man City manager across competitions.

Messi said, “Pep is the best coach I have ever had. Everything he planned always ended up happening.

“He’s special in the way he sees things, prepares for matches and communicates.”

He added, “Guardiola did a lot of harm to football, too, because it seemed too easy, so simple that…