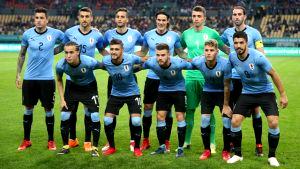 Uruguay are South America’s football bigwig with thirteen appearances at the World Cup while Qatar’s campaign would be the fourteenth for the Sky Blues.

They are the first team to lift the trophy in 1930 and repeated the feat 30 years later. Uruguayans have also played three semis at the biggest world soccer tourney, and no doubt have the squad that can go as far as the semis in the next one.

As fifteenth-time Copa America champions, they are most likely going to scale through the group stage as they had done in the past recent World Cup campaigns. They are grouped with Portugal, Ghana and South Korea.

However, the group H they belong to has pitched them with familiar foes, that might have come for revenge…