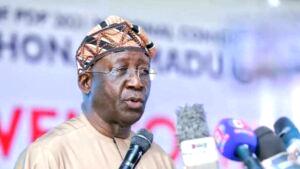 National Chairman of the Peoples Democratic Party (PDP), Dr. Iyorchia Ayu, has asked Nigerians to sack the ruling All Progressive Congress in 2023, in order to start living a meaningful life again.

Ayu, lamented that the President Muhammadu Buhari administration was responsible for the high cost of living and economic downturn in the country.

Speaking through the National Secretary of the party, Senator Sam Anyanwun, in Akure, the party’s chairman, blamed the APC for destroying the economy of the citizens, and noted that the government of APC has brought untold hardship to the people.

He was speaking with newsmen after the installation of the former governorship candidate of the party, Eyitayo Jegede, as Balogun of the Cathedral Church of Saint David, Ijomu Akure, the State capital.

Ayu said life has become unbearable since 2015 when the ruling APC assumed the leadership of the country.

According to him, the only way out is to vote…