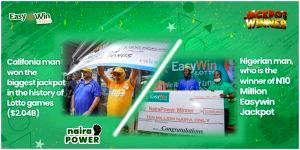 A California man won a world record lotto prize of 2.04b  playing Powerball Jackpot Lotto. The man with undisclosed identity have been playing lotto games for a while. It was learned that the record powerball drawing was sold in a local gas station and a convenient store called Joes Service Center in Altadena, California. This is not actually the first time someone have won billions of dollars in jackpot lottos, as record have shown that people have won $1.59b and $1.54b in 2016 and 2018 respectively.

Jackpot lotto games can undoubtedly make one an automatic millionaire if they play the games consistently.

Easywin has a similar Super Jackpot Lotto game called Naira Power that have made people automatic millionaire in Nigeria.

Last year, we had a record winner of easywin jackpot game, who went home with #10 Million and became an automatic millionaire.

We are up again with another super…