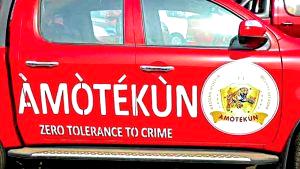 As part of efforts to stem the spate of kidnapping, the Oyo State chapter of the Southwest Security Network, codenamed Amotekun has uncovered four AK rifles, military camouflages and about sixty rounds of 7.62 mm ammunition, alleged to have been abandoned by kidnappers operating in an undisclosed forest in the state.

Other items recovered were wraps of cannabis, a raincoat and two Nigerian Army caps and one beret.

Briefing newsmen on yesterday at the state headquarters of the corp at Moniya area, Ibadan, the Commandant of the corp, Col. Olayinka Olayanju (rtd), explained that the men of the command have been combing the forests in some parts of the state, following the recent abductions of passengers along the Lagos/Ibadan expressway.

He said the efforts of his men paid off last week Saturday when the items were discovered in one of the forests, following a tip-off that…