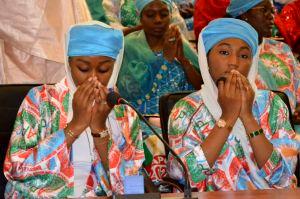 Two daughters of President Muhammadu Buhari, Zahra and Hanan were among other notable figures who joined women from Nigeria northwest to flag-off Tinubu/Shettima presidential campaign in Katsina on Wednesday.

Nevertheless, their mother, Nigeria’s First Lady, Aisha Buhari, who is the Grand Patron of the Tinubu-Shetima Women Presidential Campaign Team,
was represented at the ocassion by the wife of the APC Presidential candidate, Senator Remi Tinubu.

While addressing the northwestern women at the Katsina People’s Square where the flag-off held, Senator Remi thanked the Katsina Governor, Aminu Bello Masari and the good people of Katsina State for the years of friendship and support shown her husband over the years, assuring that they will not forsake the north if the party wins in 2023.

She also prayed to God to grant Masari the wherewithal to continue to contribute to the wellbeing of our nation for many more years to come.

“I want to assure you…