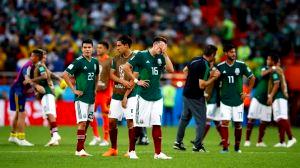 Mexico suffered an agonising exit from the World Cup on goal difference on Wednesday despite beating Saudi Arabia 2-1 in a dramatic finale to Group C.

Second-half goals from Henry Martin and Luis Chavez secured victory for Mexico but they finished third behind Poland after Salem Al-Dawsari’s late strike.

Mexico desperately pushed for a third goal in an effort to improve their goal difference as they faced elimination on FIFA fair play rules.

Saudi Arabia’s win over Argentina in their opening match was one of the World Cup’s great upsets, but they crashed back down to earth with a 2-0 loss to Poland in their second game.

Coach Herve Renard urged his players to show that was no flash in the pan and write themselves into Saudi football history by reaching knockout rounds for the first time since 1994.

Having failed to win either of their first two group games for the first time in 44 years, Mexico knew victory was essential if they were to stand a chance of…