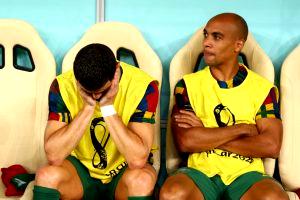 Ronaldo found himself watching on from the bench in the last-16 tie after leaving the pitch in anger against South Korea in Portugal’s final group stage game. It topped off a bad couple of weeks for the 37-year-old after his Manchester United contract was terminated following his drama-filled interview with Piers Morgan.

The Euro 2016 winners didn’t need Ronaldo though, as Ramos thundered in a near post shot to give his side the lead. The 21-year-old was playing just his fourth international match, and his first at a World Cup, and was overjoyed with the finish.

His teammates flocked to join him in amazement for the celebration too, but as the cameras panned to Ronaldo on the bench, it wasn’t clear his side had just taken the lead. He did…