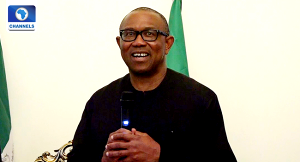 The National Secretary of the Labour Party, LP, Umar Farouk said only Nigerians can stop his party’s presidential candidate, Peter Obi from winning the 2023 elections.

Farouk stated this in an interview on Channels Television’s Politics Today on Thursday.

When asked what could stop Obi from emerging Nigeria’s president in 2023, Farouk said, “That is the docility of Nigerians not to select good leaders. If Nigerians feel that they want to continue with the old order, that they don’t want a good leader, a leader that is going to salvage the situation that is up to them.”

According to Farouk, with the momentum of the Obidients as Obi supporters are fondly called, the party is assured of victory.

He insisted that the Nigerian people must decide that they are tired of the old order.

On the crisis rocking the Ogun State chapter of the party, Farouk alleged that some members of…